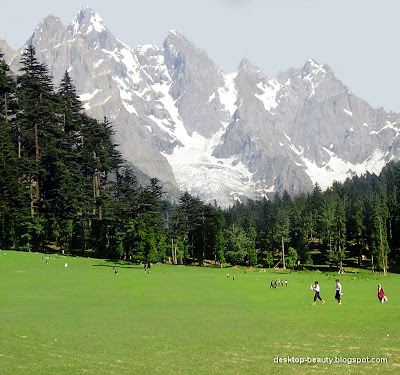 These mountains of Mankhial and their meadows are located Just above the town of Kalam in Swat. Not to difficult to reach there but the meadows hide themselves among trees so not many people have reach above this mountain to reach here. 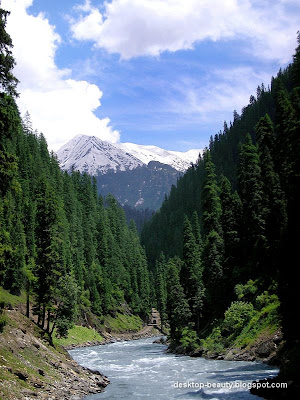 Nikron valley is the name given to Neelum Valley at Nikron. It is the place one worth visiting and is far away from the commercial tourism destinations and relatively save from deforestation that's make it so special for a nature lover. In the far Sub mountains of Nanga Parbat Massif are dominating seen and are definitely inviting the tourist for Visiting the Shonter Valley located between them and Nanga Parbat. 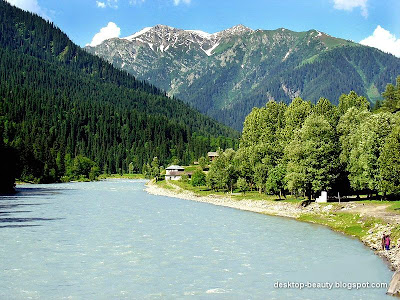 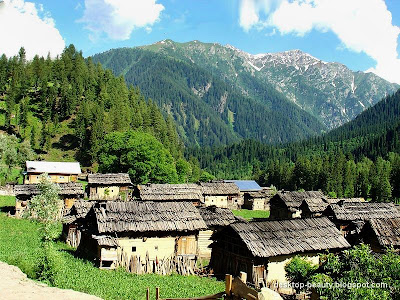 This is the scene of the village halmet located in Neelum Valley Pakistan. neelum valley is definitely the hidden pearl of Pakistan and a jewel of Himalayan valley no other valley in Kashmir and Himalayas can compare this valley and even most of Pakistanis know little about it and have little visited there. Ths traditional culture and traditional building style of Kashmiri houses mixed with spectular scenery can be found only in Neelum valley. Here there are ever green forests of pine,fir and other faunas are abundant in the valley. 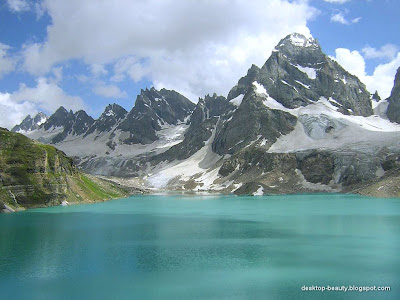 Yes if I say this lake as a crown it would not be wrong. Located high above the Neelum Valley this fascinating lake is located at a high ground at 13,500 ft approximately. The region is remote less and its surroundings are calm and peaceful. This lake is located in Neelum Valley, Ajk (Azad Jammu & Kashmir) Pakistan. The name of lake is "Chitta Katha" 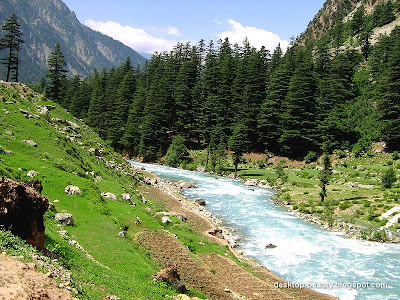 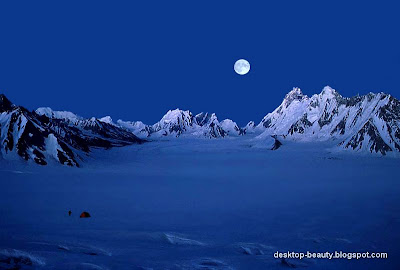 This might happened with you too if you are trekking on the largest non-polar glacial world "The Karakorams". The karakoram is one of the greatest mountain range on earth with almost entirely in Northern Pakistan starting from west and runs towards east the karakoram covers an area of 300 miles in between.The Sim gang Glacier also known as "Snow Lake" forms the divide between the Hipar, Biafo and Panmah glaciers. This is the longest glacial trek in the world outside polar regions with the incredible length of 126 km.The highest mountain in the picture is baintha Braak 7285 m See close picture of Baintha Braak 7285 here 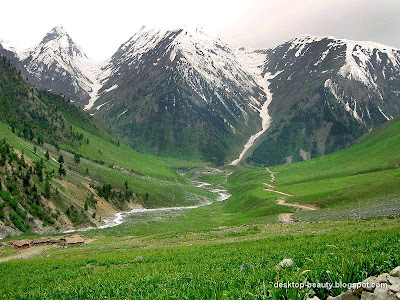 This is taken near Sharda in Azad Kashmir, Pakistan. It is indeed a fairy land one after one you will see sceneries like this. You don't need to be a photographer when you are in this part of Pakistan all you need is just to click one after one scenery. Minimarg is the name of the place. 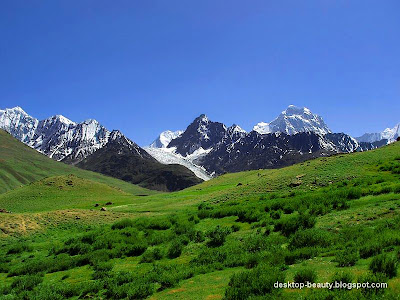 The last western hold of Karakoram remains till Karumbar and Ishkoman and at here 300 miles long journey of Karakoram Finishes from Siachen Muztagh to end of Batura Muztagh and then starts another majestic range of Mountains "The Hinduraj range" of Pakistan. This time a bit green with less amount of glaciers and heights. 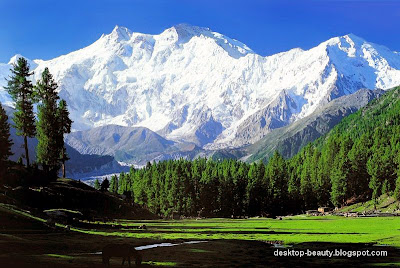 This place of Pakistan must be included among Ten Most beautiful places of the world. The World Ninth Highest Mountain "Nanga Parbat" 8126 meters above sea level in the Background. 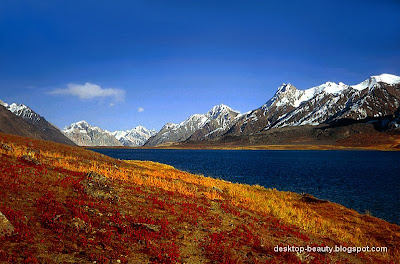 The spell bounding lake of Karambar in the border's region of Chitral with Wakhan Corridor of Afghanistan. Ishkoman is also very near from here. The lake itself is at 4300 m above sea level and is among one of the highest lakes of the world. The reddish wild flowers are awesome in the end of Summer's season. The Lake itself is 3 km long approx.

The beautiful Karambar lake and Karambar Pass at 4300 m approx above sea level in Chitral, Pakistan 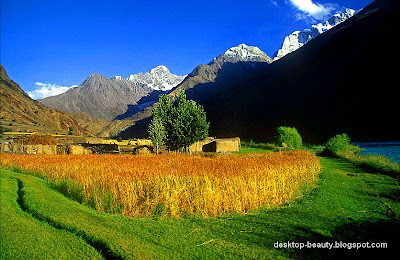 The Beautiful Village in the Mountains of Hindu Raj named as "Kishmanja" in Upper yarkhun valley, Chitral. In the background Koyozoom peaks(6871 metres Above Sea Level) rising into the sky. notice the river on the right side coming from glaciers in the far. 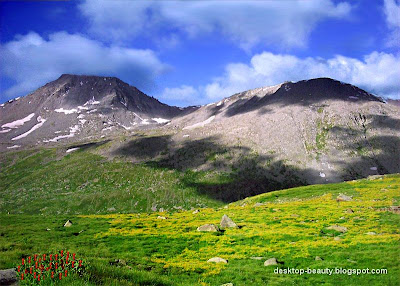 Near Burgill Top in Deosai, Pakistan 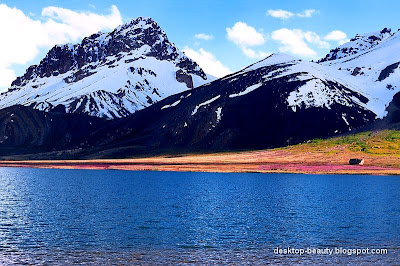 The mountains of Pamirs almost follow same pattern and same Slope that is what made Shimshal So beautiful and Unreal. The gentle slopes of Pamirs are so soothing to the eye unlike Karakorams in the other parts of Pakistan whose height makes one neck to feel uncomfortable. the flowers spread on the fields are Marvelous. The Lake is just an addition to the beauty.
Credits: Muhammad Ali Jawed 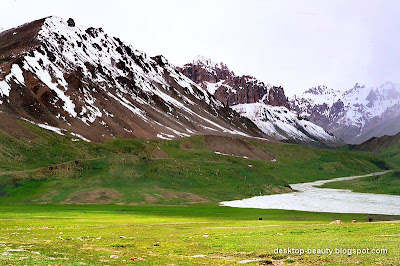 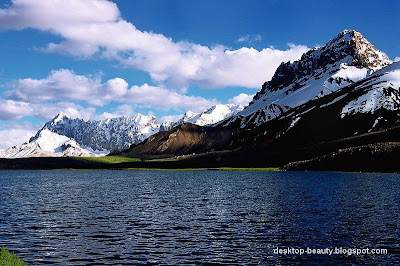 The beautiful valley of Shimshal constitutes the northern most Pamir mountain ranges of Pakistan. This is one of the most beautiful point in the valley as the Shimshal lake surrounds it.The mountain of Mingli Sar is in front of it. From here one can have the glimpses of Karakoram mountains located just south of it. The world largest glaciers are located on the South eastern side of this valley. To the North is located the province of China while to the left are Hindukush ranges and their beautiful pastures.K2 i located on the southern eastern side of this valley.
Credits: Muhammad Ali Jawed 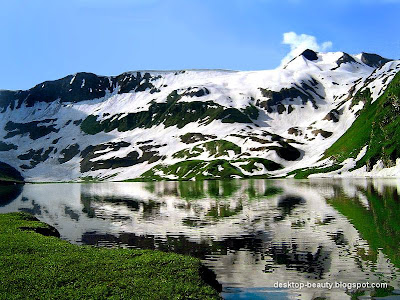 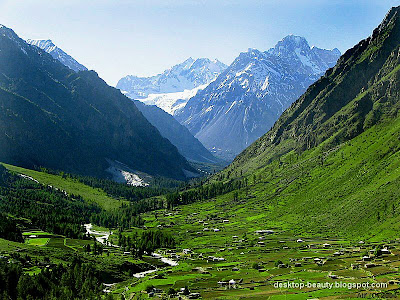 Green In the Black refers to the Kararkoram mountains whose name means Black Mountains and it is surprisingly that a lush green valley is found inside the snow clad peaks and largest glaciers of the world.
Credits: Atif Gulzar 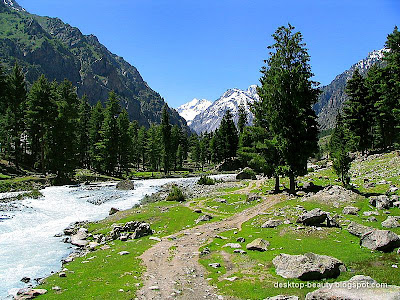 The beautiful valley of Naltar in the south eastern side of Gilgit is 35 km away from the main town. It's lush green pastures and green carpeted ground make it a jewel of the Gilgit. The untouched forests of Naltar compelled WWF to and it is now a protected game reserve.The beautiful Small stream like river coming from the Shani glacier in the far.
Credits: Atif Gulzar

Posted by kute_group at 10:04 PM
Email ThisBlogThis!Share to TwitterShare to FacebookShare to Pinterest
Labels: Northern Areas